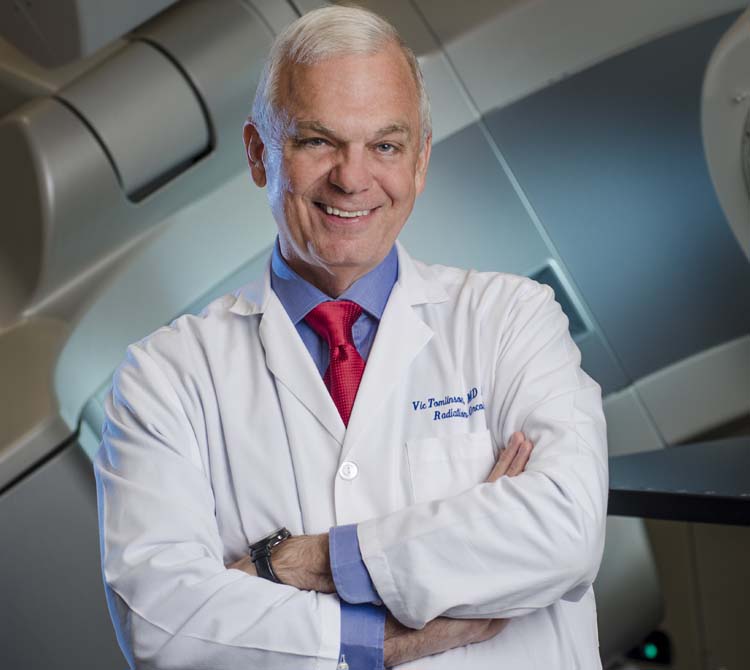 Dr. Tomlinson was born and raised in middle Georgia. His hometown of Fort Valley is known for growing peaches and manufacturing Bluebird school buses. He graduated from the Georgia Institute of Technology with a specialty in mechanical engineering and worked as a construction engineer for Duke Power Company at the Oconee Nuclear Station. Later, he worked as a design engineer for Georgia Power company in Atlanta, Georgia. He went on to attend the Medical College of Georgia and graduated with an M.D. degree, which he followed by completing an internship in internal medicine. He then worked a year in emergency medicine as an attending physician at the University Hospital in Augusta, Georgia. Subsequently, he completed a residency in radiation oncology at the Georgia Radiation Therapy Center. His research as chief resident was accepted for presentation at the American Society of Radiation Oncology national meeting.

Following residency, Dr. Tomlinson started to practice radiation oncology in Anderson, South Carolina as Medical Director of the Department of Radiation Oncology. With his mechanical engineering background, he assisted in the design and construction of the cancer center. In his early years of practice, he served as the radiation safety officer for AnMed health. He is board certified in Radiation Oncology and is a fellow of the American College of Radiation Oncology. He is an active member of the American Society Radiation Oncology (ASTRO). Dr. Tomlinson is the Chairman of the Department of Oncology at AnMed health and has served for many years on the quality coordinating council, where he strives to improve the quality of healthcare delivered in this facility. He was a founding board member of Hospice of the Upstate.

Dr. Tomlinson and Dr. Dennis Whatley, a local urologist, started a very successful prostate seed implant program at AnMed health in 1996. This program has expanded and has treated hundreds of patients since its inception. The prostate cancer program continues to follow leading edge technology with the use of the TrueBeam STX linear accelerator and the early adoption of Space OAR hydrogel for rectal protection during radiation. Dr. Tomlinson and his urology colleagues were some of the first physicians in the United States credentialed to perform the hydrogel procedure.

Dr. Tomlinson is an aviation enthusiast and a pilot, holding single and multiengine instrument ratings as well as single engine seaplane rating. He enjoys farming, raising Scottish Highland cattle and rare breed chickens. He enjoys Bluegrass music, classical music and rhythm and blues. He is a history enthusiast, especially on World War II and the Civil War. He is married to his high school girlfriend, Nancy Dodd Tomlinson, and they have 3 sons, one daughter, one grandson and one granddaughter. He enjoys spending time with his family and attending Catholic Church in Greenville, South Carolina.

Dr. Tomlinson thoroughly enjoys his practice with Dr. Cannick, who joined him in 2012.  They both are assistant clinical professors in the Department of Radiation Oncology at the Medical University of South Carolina.  They have the same philosophy of patient care and service, and meet all patients together. This provides for continuity of care by always having a physician available while patients are being treated. Dr. Tomlinson and Dr. Cannick both feel that God is the true physician and that they are His servants.